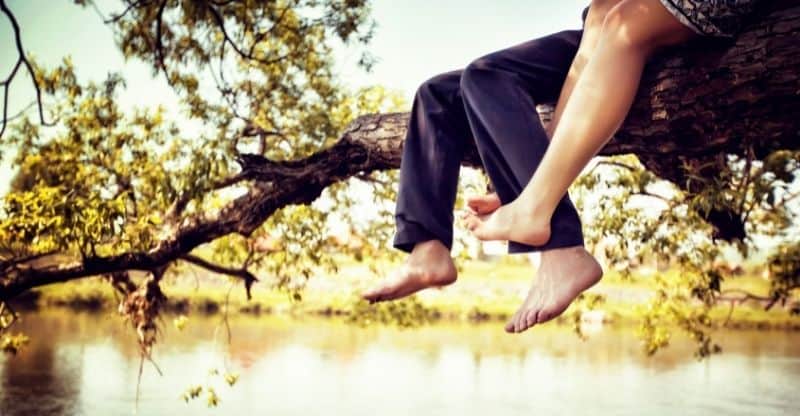 Do you ever find yourself thinking about a past relationship? A past love that didn’t work out right, but you can’t help thinking what could have been?

Then this post is for you. Because, frankly speaking, you’re not alone. Every day people get caught up thinking about a long lost love.

So here’s our pick of the best songs about old love. Some are about rekindling the love, others are about struggling to come to terms with a breakup, and most are somewhere in between.

Note, this isn’t a list of golden oldies – for that, check out our playlist of old love songs.

Here’s a beautiful song about wanting to go back in time and start anew. It’s one of the best breakup songs in recent times.

The narrator works too hard (“guessing at numbers and figures”) and lets his relationship take a back seat. But that costs him. He now “wants to go back to the start.”

“Nobody said it was easy, it’s just a shame for us to part.”

The brilliant video plays backward, depicting his wish to reverse time. The car crash riding off a cliff is a metaphor for his relationship bust-up.

Freddy Mercury wrote this gorgeous (probably autobiographical) song about a guy who abandons his lover, only to realize he can’t live with her (or him).

Who the song is about is a subject of discussion that we’ll never know. On various occasions, he said the song was about nobody in particular.

“Bring it back, bring it back, don’t take it away from me” he confesses. This is Mercury at his spellbinding best and arguably one of the best love songs ever written.

Canadian band Arcade Fire sing about many challenges we face in life, such as growing up and falling in love.

In ‘Old Flame,’ singer Win Butler recalls the moment he and his past love connected (“You knew in five minutes, but I knew in a sentence”).

But, like a moth to a flame, he knows he should stay well away. But he’s helpless. He sees her “eyes are flutterin’, such pretty wings” and can’t help himself. But in desperation, wonders “why do we go through all of this again?”.

In this romantic country ballad, the narrator can’t accept the relationship is over. Even though his girlfriend has left town without leaving a number and moved to Austin, Texas, he’s still in pieces.

In case she calls, he leaves a message on his answer machine, “If this is Austin, I still love you.”

It all turns good in the end, though. Finally, she sees sense and calls him.

After going their separate ways, Peaches & Herb realize they miss each other and that life is better together. So Herb commits to never cheating again, and they live happily ever after.

If only life was always this simple!

Ever want just to hit ‘reset’ on a relationship and start over again?

That’s the idea in this sweet pop song by Jason Castro. It’s not hard to fall in love again, he says, “I don’t have to try, it’s so easy.”

We all mess up. It’s about the decisions we make after. That’s the premise of this story about a guy who makes a wrong turn that ends him up in prison.

When he gets bail, he has to pick up the pieces of his old life and rekindle the relationship with his family.

Does he make the right? You’ll have to watch to find out.

We all have an idea of the sort of person we want to be.

Here, the narrator asks God to help patch things up with his woman. If “there’s any way for her and me to make another start” he says, “could you see what you could do.”

‘Always on My Mind’ – Willie Nelson

In this famous song written by Wayne Carson, the narrator admits he’s made mistakes and didn’t always give his woman the respect she deserves.

“All that ‘Always’ was about was one long apology,” Carson admitted in an LA Times interview.

Other artists who covered the song include Elvis Presley and Pet Shop Boys.

The B-side to Owens’ No. 1 hit, ‘My Heart Skips a Beat,’ ‘Together Again’ is about rekindling a lost love.

Finally, he finds peace in his true love’s arms. “My tears have stopped falling, the long lonely nights, are now at an end.”

Plenty of people have covered this, including a great version by Emmy Lou Harris.

This number one hit by the Jackson 5 is about a young kid trying to get his girl back. An 11-year-old Michael Jackson sang lead, breaking history in the process (he was the youngest person ever to feature on a #1 hit single).

It’s often considered the best pop song ever. It’s certainly up there.

This sickly sweet Motown hit is another case of a guy who’s crazy about a girl, but the feeling isn’t mutual. But, like a man possessed, he can’t hide his love for her, despite her fooling him around.

It’s a classic case of unrequited love. “In and out my life, you come and you go, leaving just your picture behind,” he sings. Poor guy.

‘Stuck on You’ – Lionel Richie

Ever get the impression you’re running away from love? Maybe you’ve been hurt in the past, and without knowing it, you keep your defenses up to stop getting hurt again (you wouldn’t be the first).

That’s the gist of this song by soul legend Lionel Richie. Here, the narrator has an epiphany – he’s been a total idiot and realizes how much he actually loves her. So it’s high time he goes back home, he admits.

Fortunately for him, she stuck around.

‘Wake Me Up When September Ends’ – Green Day

This autobiographical song by Green Day frontman Billie Joe Armstrong is about his father (who died from cancer when he was 10, in September 1982).

After the funeral, Billie locked himself in his room. When his mom knocked, he answered, “Wake me up when September ends” (hence the name of the song).

As sad songs go, it’s right up there.

While the lyrics are about his Dad, the video is about a couple who swear they will always be there for each other until he enlists in the US Marine Corps. You’ll have to watch the video to see what happens.

In this Charlie Puth song, a guy is left wondering where it all went wrong. His lover has moved on and found someone else, but he can’t get her out of his brain.

For those of you who thought this might be the Cliff Richard song, I’m sorry to disappoint 🙂

Here, Braxton pleads with her former lover to return to her and undo all the pain he’s inflicted in this heartbreaker of a ballad. She’s completely lost without him.

Honestly girl, if he caused you that much pain, do you really want him back?!