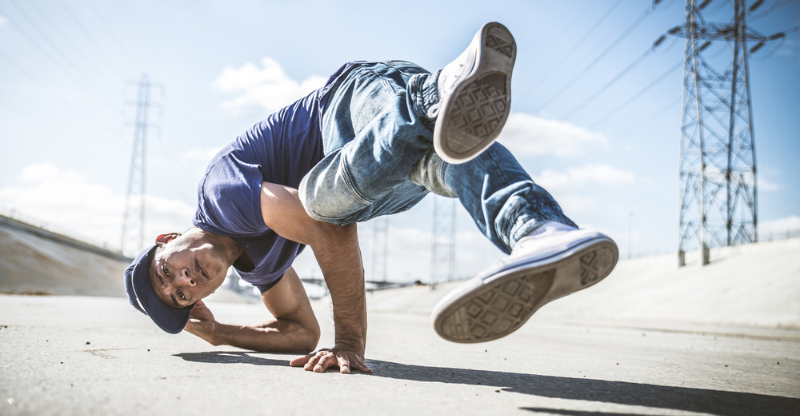 It’s time to break out your dance moves!

You won’t be able to resist dancing to these songs even if you don’t consider yourself a dancer. Good songs for breakdancing typically have a groovy bassline, a lively drum rhythm, and many feature horns to add extra fun. Most songs borrow beats and sounds from another genre, including funk, electro, pop, hip-hop, and jazz.

Breakdancing is all about quick moves and intricate poses, and this list of the best breakdance songs provides the perfect soundtrack for b-boys and b-girls!

One for the Treble – Davy DMX

The beat of this song makes it a good one for breakdancing. The rhythmic drums speed up and slow down throughout the song, which lets the dancer try out a variety of moves at different speeds. Some instrumentation slides around, as well as some record scratching sounds, which a dancer could effectively match in their routine.

‘The Breaks’ would be a terrific breakdancing song, especially if you’re in front of a crowd, because it invites audience participation. The song starts with Kurtis Blow saying, “clap your hands, everybody,” and those claps continue throughout the song. Getting an audience to clap for you would raise the energy of the whole experience. The song was even written as a tribute to breakers everywhere.

Related: This song features on our list of cool 80s songs.

If you’re a beginner breaker or want to try it out, ‘Don’t Sweat the Technique’ is a confidence booster. The lively horns and melodic rapping give you an obvious starting point. The repetition of the title line also reminds you not to worry too much—if you’re having a good time, then the technique is not the biggest concern!

‘Rockit’ was actually the first song to feature record scratching. Scratching is almost common practice now in songs like these, but of course, it had to start somewhere! Just like this song pioneered a new effect, dancers could try out some brand new moves to the unique synth melodies.

Give It Up and Turn It Loose – James Brown

This song became a big part of breakdance culture, encouraging people to let loose and dance. The interesting riffs of the horns lay a backdrop for some floor work, which are moves that consist of intricate footwork. James Brown’s raspy belting also adds an air of passion to the song that breakers can apply to their moves.

‘New Horns’ is fairly repetitive, with each section featuring a slightly different sounding horn or main instrument. The riff remains the same throughout the song, though, offering lots of opportunities to try different moves over the same sounds. After such consistent music throughout the song, surprising the audience with a suicide (a death drop) at the end would be an unexpected and riveting way to end.

Jam on It – Newcleus

The simple bassline of ‘Jam on It’ lays the groundwork for some cool moves at the beginning of the song, and later the cadence of the rapped lines makes it easy to match footwork to. As long as you keep jamming, this song will always be fun.

This song’s beat slowly grows in volume and intensity, beginning with a synth that sounds like an organ (which is probably why the song is called ‘Organ Donor’). Most breakdancing songs, and hip-hop songs in general, center around drums. This track makes you wait for those drums, though, which builds anticipation. The dancer could match their moves to the different notes of the song, going into a power move when that beat kicks in.

Paid In Full’ features a steady beat and immersive vocal ad-libs. The rap is about struggling with money and the gratitude that comes with overcoming this and being able to make money for something you love. That’s a feeling shared by pretty much any artist, especially breakers chasing their dreams on the street.

With a title like ‘Break Dance – Electric Boogie,’ you know this song has to be made for breakdancing. Record scratching, modulated vocals, and a jumping beat drive this song. A dancer would know just what to do by following the instructions of the vocals, which say things like “freeze” and “stand on your head.”

Related: Check out these songs with the word electric.

The Witch – The Bamboos

The bassline of this song is unmatched, offering a groove that only gets better when the horns are introduced. Head spins, stylish footwork, and a call-and-response dance style would all fit the vibe of this song. Different sections of the music almost sound like they’re talking to each other, and breakers could use this effect in their own routine.

This track has a quick tempo, but brief pauses in the music lend themself to a freeze move. The energy is high; even just listening to the song makes you feel like you’re seeing it live. Growling low horns and an energetic sax over a quick shaker all combine for an amazing song!

A lot of breakdancing is about creativity and novelty. Dancers are celebrated when they come up with new moves or combos or if they put a spin on an existing popular move. ‘Terrapin’ would be a great song to try out your creativity because of its various yet simple sections. There’s a shaker and horns, but there’s nothing too difficult to dance along to.

‘Know the Ledge’ was used as the theme song for the 1992 film Juice, and the lyrics reference this a few times, like in the line “time to build my juice back up.” This song is constantly driving forward, with few instrumental breaks or switch-ups, meaning dancers would need to get creative to keep the crowd captivated!

Related: Find this song on our list of 90s hip hop songs.

‘Funky Bijou Anthem’ is obviously an important one to Funky Bijou, made up of Dj Marrrtin and Deheb. Horn sections lift you up, and then cowbell drums break it down. Background vocals shout “hey” to hype up whoever is dancing. This song would be good for a dance group, where each member takes a spotlight during one of the sections.

Macklemore raps about passion in ‘B-Boy,’ giving breakers a great opportunity to show off their passion for breakdancing. He raps about how some people are only in the game for money, which makes their art less authentic. The line “lemme see you get ill, for real, pop and lock!” encourages breakdancing to this song.

‘Feel Good Inc.’ is a riffy song that could be great for freezes when you hold yourself in a pose for a few seconds before you continue dancing. In the repetitive guitar melody, the first note is slightly longer than the others. Freezing during this note and then continuing when the rhythm picks back up would make for a cool effect.

This uptempo tune with trilling horns makes it a triumphant one. The audience is going to have a good time no matter what kind of moves the dancer is making. Some sections are more staccato and beat-driven, and other sections have a rhythm that sways back and forth. This lets the dancer change it up as the song goes on, making sure the audience stays interested.

More of the best breakdance songs: