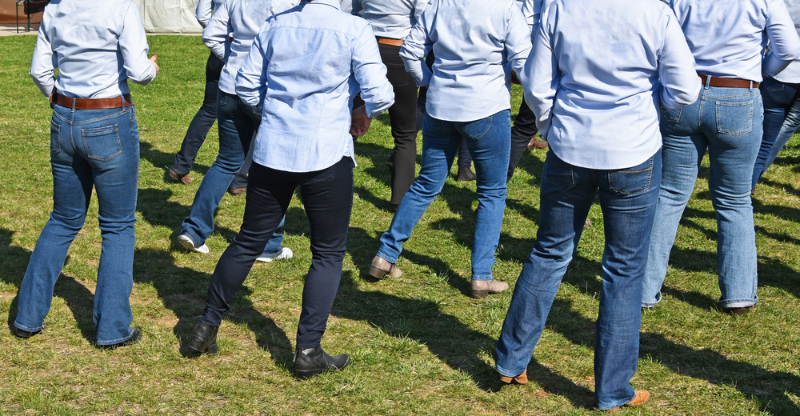 Country artists have long been putting out music people can dance to. From rocking the jukebox to slow dancing with your special someone, the genre has a way of making you sway your hips.

In the 1990s, line dancing blurred cultural lines and became widely popular. These days, while country music has become an even more upbeat genre, people are still grooving to the classics. So for your sweet moves, here’s a thorough list of country line dance songs to take to the dance floor (or the field!).

By the way, if you’re putting together your wedding playlist and want to include some popular line dances for your wedding party, this list is perfect too :-).

Though country songwriter Billy Ray Cyrus eventually had a career revival thanks to his work with daughter Miley Cyrus on the kid’s show Hannah Montana, he scored his first number one hit in the 1990s with line dancing classic, ‘Achy Breaky Heart.’ Though this track is a fun one to get down to, the lyrics set the scene of a heartbroken man on the verge of a breakdown because his longtime lover just left him.

“Come on, baby, let’s go boot scoot!” Many weren’t sure exactly what the ‘Boot Scootin’ Boogie’ was until they learned the choreography to the song at their favorite local watering hole. Lead singer Ronnie Dunn lays out the moves for you in the lyrics telling you to “heel-toe” and “dosey-doe.” This was just one of the country duo’s many hits in the 90s.

Country Girl (Shake It For Me) – Luke Bryan

This is a song sure to get the ladies dancing by the jukebox. Country singer Luke Bryan made the song all the more famous with his sexy dance in the tightest Wranglers possible while performing the song at various awards shows. The song celebrates country women and all the ways they drive cowboys wild.

Words of caution are offered in this classic line dance song by country songwriter Tracy Byrd. The song takes place at a small town watermelon festival where the local mayor urges citizens to take precautions if they drink the town’s famous spiked watermelon beverage. He tells them not to drive. Instead, “do the watermelon crawl,” a local well-known dance.

This crossover hit involves a mysterious legend (Cotton Eye Joe) who takes on a mythical nature in the song, riding from town to town charming spoken-for women and then riding off without warning. Though it’s a traditional folk song with a long history dating back to the 1800s, Rednex’ version became so popular in the 90s that it played on mainstream radio stations alongside pop and rock artists. As it’s so well known, it’s a popular one to play at a wedding reception.

Related: This one also appears on our playlist of banjo songs.

Down in Mississippi – Sugarland

Jennifer Nettles of country duo Sugarland sings about ditching her boring life and heading south for a little fun in their early tune ‘Down in Mississippi.’ This song was featured on their debut album Twice the Speed of Life, which they released as a trio with musician Kristen Hall. Soon after the release though, Hall left the group and they’ve been a duo (featuring Kristian Bush alongside Nettles) ever since.

Country duo Big & Rich get cheeky with their first rowdy hit, ‘Save A Horse (Ride a Cowboy).’ The song chronicles the story of two lethario-types who are big hits with the ladies. They become famous on “Broadway” for their antics and when they pass by the ladies on an “old stud, Leroy” all the smitten women yell, “Save a horse. Ride a cowboy!”

Related: Trot on over to our playlist of songs about horses.

Any Man of Mine – Shania Twain

Shania Twain tells listeners just what kind of man she wants in her hit ‘Any Man of Mine.’ This became one of many women-empowered country tunes of the 90s alongside The Chicks’ ‘Goodbye Earl’ and Martina McBride’s ‘Independence Day.’ Twain’s ‘Any Man of Mine’ and one of her other hits, ‘Whose Bed Have Your Boots Been Under,’ are popular line dancing tunes.

Should’ve Been a Cowboy – Toby Keith

This was Toby Keith’s debut single and first hit. ‘Should’ve Been a Cowboy’ features Keith fantasizing about the ways of the cowboy, and wanting to trade in the mundane for a life on the range. He was inspired to write the tune after witnessing his older buddy get rejected by a young woman at a bar, only to see her several minutes later dancing with a cowboy.

Related: This one also features on our playlist of cowboy songs.

This classic 90s country song has singer-songwriter Alan Jackson singing about all the important life lessons he learned while down on the “Chattahoochee.” From learning how to swim to learning how to love, he did a lot of growing up on the hot small-town riverbank, which helps form the Alabama-Georgia border.

Related: Do a line dance shuffle over to our playlist of old country music.

Baby Likes to Rock It – The Tractors

This festive country-rockabilly mashup was the group’s first single off their self-titled album in 1994 with Artista Records. It garnered them two different country music awards nominations and ultimately they re-recorded the song just one year later with a lyrical Christmas theme for their album, Have Yourself a Tractors Christmas.

Songs about the bodacious female figure were no longer just for the rap/R&B genre once country singer Trace Adkin’s ‘Honky Tonk Badonkadonk’ hit radio stations. He sings about his love for full-figured country women with his easily-recognizable baritone drawl. When he found out his daughters were embarrassed by his dancing, he made sure to add in a few moves to his performances during this song.

Alan Jackson’s hit ‘Good Time’ was so popular it got its own line dance and is now a featured number at country nights across America’s bar scene. Jackson got back to his traditional 90s country roots with this tune while singing about exactly how he has a “good time.” The song speaks to blue-collar America, with lyrics talking about working all week for Friday so you can get paid and head out to your favorite bar for drinks and a little dancing.

Dolly Parton has been known to release female-empowered tunes and her popular track ‘9 to 5’ is one of them. She wrote the song for the movie she starred in by the same name. Though it was a comedy, it tackled serious cultural issues at the time involving genders. The movie, Parton’s acting debut, also featured well-known actors like Jane Fonda and Lily Tomlin.

Related: Head on over to our playlist of easy karaoke songs for women.

More often referred to as ‘The Electric Slide,’ though this song was a huge dance hit in the early 90s, its origination can be found in the 70s in Jamaica. A member of Bob Marley’s popular reggae group The Wailers wrote it and gave it to fellow musician and Marley associate Marcia Griffiths to record.

If you grew up in America in the 90s you heard this song all too often at “skate night” at your local roller rink. With a bouncy groove easy to dance (and skate) to, the song spends a lot of time explaining its accompanying dance to you. The song was originally a Spanish dance tune, but when BMG got a hold of it and made an American version, it hit the number one spot on the charts. It’s also one of the most popular wedding line dance tunes.

DJ Casper created this groovy number for fitness chain, Balley’s Fitness, who then created a dance to it for their members. Because the dance was so fun and easy, it quickly caught on among fitness buffs and was ultimately released as a single. A couple updated versions of the song have been released, causing it to hit number one on the charts multiple times.