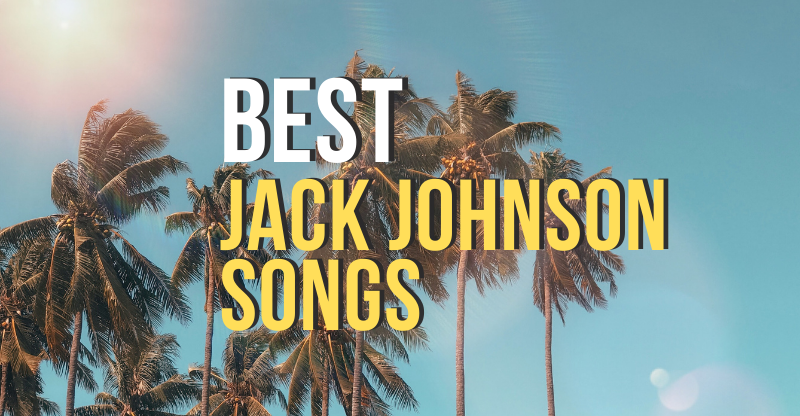 Jack Johnson is an American singer-songwriter who has also had a busy career in other areas, including surfing, acting, and documentary creation.

However, he is probably most celebrated for his music within the acoustic pop and soft rock genres. Here’s our pick of the best Jack Johnson songs, in no particular order, that showcase the high points of his career.

Grab yourself a cold one, kick back and relax 🙂

This is one of many Jack Johnson songs that the singer-songwriter has written about his wife while eventually reworking the lyrics to have universal appeal. It’s about being better together as a romantic couple than apart as individuals. It charted in Ireland, the UK and the United States after its release and has been certified platinum or gold in a total of four countries. It includes sampling from Hoagy Carmichael’s popular love song ‘Heart and Soul.’

Related: this track appears on our sticking it out through tough times playlist.

Johnson tells his wife to stop and spend some time on the fun things with this track, which was written with that exact real-life purpose in mind. The track is meant to be simple and silly while showing the lighter side of marriage and romantic love. Country singer Billy Currington recorded a more musically complex version in 2013 for his album We Are Tonight, but Currington still considers Johnson’s version to be the better of the two recordings.

Related: this appears on our songs with food in the title mixtape.

‘Upside Down’ was written and recorded for the soundtrack of 2006’s animated film Curious George. The song highlights Curious George’s tendency to hang upside down as monkeys do, but it can also be looked at in a more universal way as being about looking at life’s situations from a new perspective. It was Johnson’s first Top 40 hit and the first song to bring an animated movie soundtrack to Number One since 1995’s Pocahontas soundtrack.

This track was written to cheer up one of Johnson’s friends who was pursuing a romantic interest who wasn’t showing any mutual feelings. One interesting fact about this song is that the music video was filmed in one take and then played backwards; Johnson had to learn to sing backwards as a result. The song charted on nine music charts across the world and has been certified silver in the UK and gold in the United States.

Related: see songs about wanting someone.

Sunsets for Someone Else

Johnson has said that this song is about people who work in advertising, sales or similar roles, but has also mentioned that it has political and social significance. At the time of writing, the track has had over 50 million streams on Spotify. It was released exclusively through streaming on Billboard on the morning of 3 August 2017, and became available for purchase on iTunes later that day. It reached Number 20 on Billboard’s US Rock Digital Song Sales chart after its release.

This song is one of many dedicated to Johnson’s wife, named Kim. The track features B-flat guitar tuning for a unique sound. The lyrics are all about only needing one special person to feel whole and happy in life. The album that ‘I Got You’ appeared on charted on the Canadian album chart and hit the Billboard Top 200 Albums chart after its release; it sold 117,000 copies in the first week of its release.

Flake’ was the first hit song by Jack Johnson. It refers to the Beatles song ‘Don’t Pass Me By’ with the lyric “Please, please, please don’t pass me by.” It seems to be about two people who can’t make things work in a relationship, even when they try with their hearts in the right place. It could also be about someone who is interested in a woman that just isn’t serious about relationships, at least with the protagonist. It’s a thought-provoking piece, in any case.

It’s been said that this song tells the story of a young woman in the world’s oldest profession by the name of Taylor. Johnson’s native Hawaii is referenced in the line, “Two thousand miles from here.” Here’s a fun fact about this track: Taylor Swift admitted during her early years as a performer that she had the song has her cellphone ringtone due to its use of her first name, even thought she was aware that the subject matter was quite suggestive.

Johnson has stated that this protest song was inspired by and about reality television shows and violence in the media in a sense; it appeared to be influenced by a Hawaiian series called Boarding House. Johnson was at a fundraiser for an elementary school when that show’s producer approached him rather abrasively about performing on the show, spurring the somewhat critical yet humorous lyrics of this track. It has been certified gold in the United States.

This is a song that encourages listeners to stop and look around them, appreciating life in its small moments as well as its bigger excitements. Johnson wrote it on a train between Paris and Hossegor. It charted in the UK and the US and was remixed by Handsome Boy Modeling School, a hip-hop duo, in 2004. This version was decidedly more upbeat than Johnson’s original recording. The official music video features Johnson surfing, as the area he was traveling through while writing it is a popular surfing spot.

This song appeared on Johnson’s 2005 album In Between Dreams. He has said that the song popped into his head while driving and was inspired by silly little moments with his wife. It’s a love song that Johnson wrote to make people laugh, smile and feel good. It also has Johnson reminiscing about the day that he and his wife met and he tried to gain her affections. It also builds upon an earlier track, ‘Bubble Toes.’

Bubble Toes is Johnson’s long-running nickname for his wife, Kim Johnson. The track, which was never supposed to be anything more than a private and silly song for his significant other, was written at a time when Johnson was trying to woo said future wife after they met. ‘Bubble Toes’ was one of the tracks on Johnson’s first album, Brushfire Fairytales, which was released in 2001 and reached the Top 40 chart in the United States.

Related: check out our playlist of bubble-related songs.

After reading some bad news in the newspaper, Johnson was inspired to write ‘Never Know,’ a track about religion and the ways that people are cruel and pushy toward each other in its name. It’s also a song that was written to promote tolerance toward others, whether their beliefs match yours or not. It was the third track on Johnson’s third album, In Between Dreams, which was released in 2005. The album received mixed reviews from critics but significant commercial success.

Constellations’ was written while Johnson was out surfing in California. He was moved by the rising moon, peaceful vibes and warm temperatures, and so created this track about the magic of the outdoors at sunset that also was inspired by childhood experiences with his father in the great outdoors. It’s a typical Jack Johnson track in that it gently encourages listeners to value the small things and the miracles of nature that are all around them.

This classic hit was originally written and performed by British-born American singer Rupert Holmes. Johnson covered the track in 2013. It’s about two individuals who are bored with their relationship and end up “meeting” each other through fresh eyes after the woman in the relationship puts out a personal ad.

It highlights how important it is to remember the things you love about your partner – and to discover new things about them – to keep your romance alive. The original song appears on our songs about the beach playlist.

Here’s a track that’s all about life, its changes, and reflecting on it all in a meaningful way. It’s a classic Jack Johnson track in that it’s mellow in sound and production style while addressing some heavy topics. It was the first track on Johnson’s second album, On and On. The album was recorded in Johnson’s native Hawaii and was certified four times platinum in Australia in addition to receiving certification in several other countries. It also charted internationally.

Johnson wrote this song, which is about not being able to sleep when there’s a lot on your mind, while he himself was having trouble sleeping one night and was playing his guitar. It highlights the frustration of not being able to solve certain problems and how that frustration can make it even harder to relax. ‘No Other Way’ appears on the internationally successful album In Between Dreams, which was Johnson’s third album and was released in 2005.

This track is all about the preciousness and unique qualities of one’s home. It also touches upon the meaning of life and its connection to nature in a metaphorical way. ‘Home’ is acoustic in style and has a thoughtful feel to its lyrics and sound. It is the last track on Johnson’s album Sleep Through The Static, which was a major international success after its release that charted in multiple countries and was certified gold or platinum in different areas across the world.

This was the opening track for Johnson’s album All the Light Above It Too, and inspired the record’s title. Johnson chose it as the title track to set the mood and theme for the rest of the songs. The track has been said to be a track that helps the listener think about what they are prioritizing in life, but in a gentle and entertaining way that allows them some sympathy and patience on their journey.