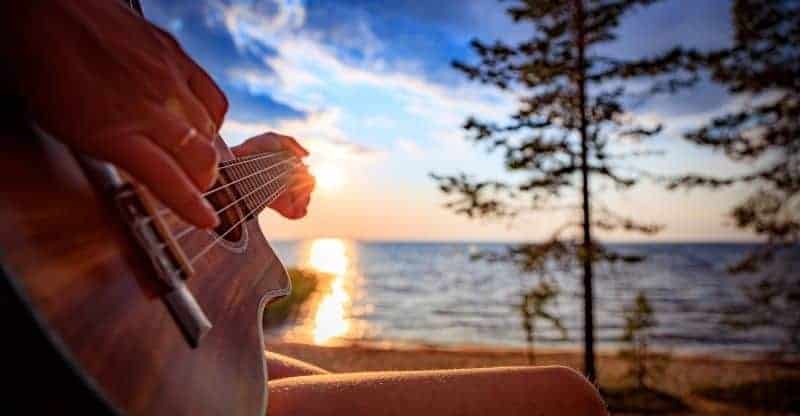 The ukulele is an incredibly popular instrument and thanks to its simple design (just four strings) it’s one of the easiest instruments to learn.

From its beautiful exotic tone to its cute, miniature size, the uke is loved by ukulele players and audiences around the globe.

In this article, we list our favorite easy ukulele songs.

You can play them on any type of ukulele, regardless of whether it’s a tiny soprano or a large tenor, as they all share the same tuning. That is, all except for the baritone uke, which is tuned to DGBE.

So what counts as an easy ukulele song? Well, to make it a bit fun, we’ll say each song:

If you’ve just started learning the ukulele, you’ll find in this list some incredibly good songs to start with that are suitable for your level (in other words, they’re very low difficulty – we all want to be able to play Somewhere Over the Rainbow, but one step at a time!). We’ve even included songs with as few as two chords.

We chose a combination of songs from different genres too, including pop music, country, rock, and reggae, so whatever your taste, you’ll find something of interest.

So, without further ado, let’s get to it.

Before we get to the songs, learn (or reacquaint yourself) with these four basic uke chords. Note, you’ll first need to tune your uke to the notes GCEA (note: the letters refer to ukulele string names).

The first of the four ukulele chords is the C Major. The good news is that playing a C on the uke is unbelievably easy (you literally play one note, and the rest are open strings). 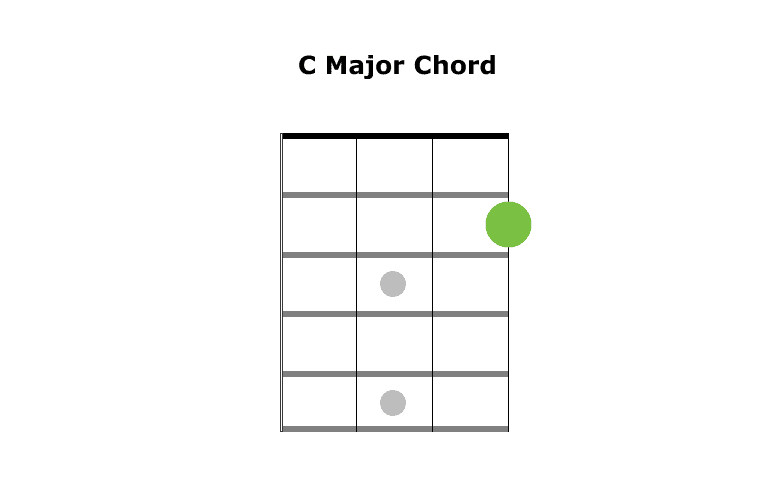 The A minor is another simple, one-note chord (we told you the uke is a simple instrument!). Play the A Minor by placing your middle finger on the fourth string, second fret. 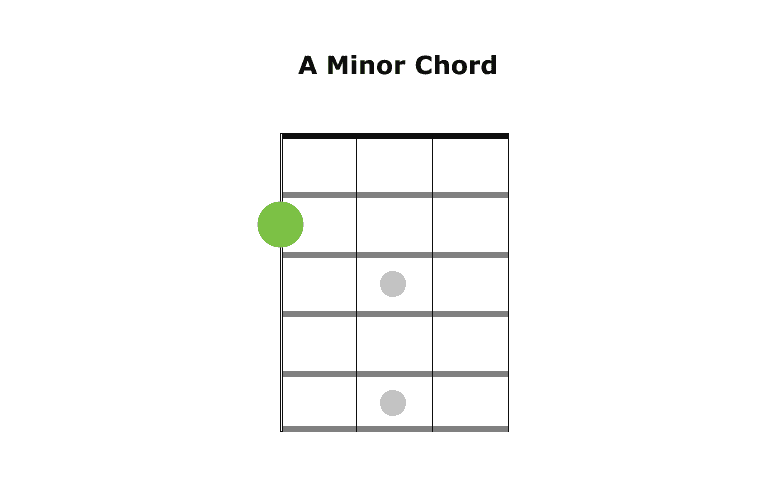 Ok, now for a two-note chord (it’s still mind-numbingly simple though). To find the F Major, fret an A Minor chord (see above) but also add your index finger to the third string. 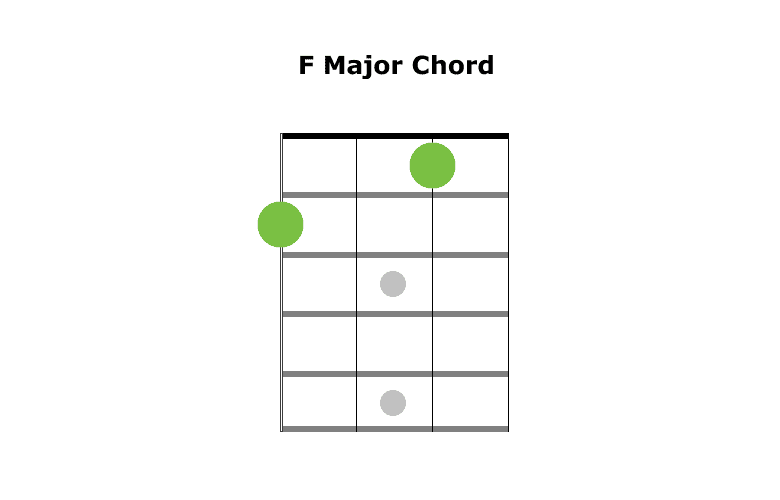 And finally, a three-note chord. It’s the most complicated of the four chords, but if you play guitar it’s easy as pie to get your head around, as it’s the same as the D shape. Even if you don’t play guitar, the G Major isn’t a hard chord to use. Note: we know many songs include the G7 chord, but for the sake of KISS (keep it simple, stupid!) we’ve left those songs out. 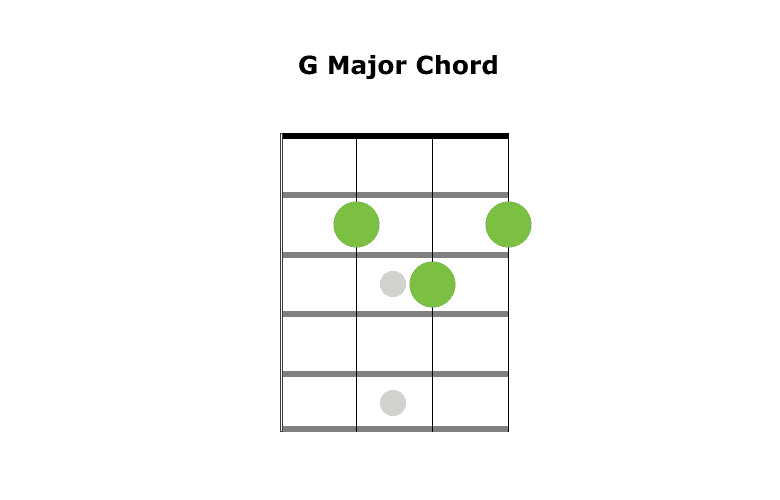 Now you know each chord, it’s time to check out our list of the best ukulele songs for beginners. Remember, there is more to music than just chords. Each song has its own particular strumming pattern and chord progression, so pay attention to that too.

Our Pick of the Best Ukulele Songs For Beginners

So now to our favorite ukulele strum-alongs for the beginner, in no particular order. We’ve included the chords for each song, plus a video tutorial that shows you how to play it. Take special notice of the strumming pattern for each song, as that really makes a difference.

We’re going to start off with a song that has just two chords, Dreams by Fleetwood Mac. Just cycle from the F and G chords and that’s the entire song! Make sure to mix up the rhythm a bit to keep the song sounding interesting.

A modern pop classic, this one works great on the ukulele. It follows a very simple chord progression that puts it within reach of most beginners. The original version is in the key of C#m, so if you want to play along you’ll have to put a capo at the fourth fret.

Whether it’s the nautical theme of the song that gels with the Hawaiian roots of the ukulele, or simply the song’s buoyant, fun theme, The Beatles’ Octopus’s Garden (with Ringo Starr on vocals) is one of the best beginner ukulele songs out there.

Stand by Me – Ben E King

This easy ukulele song is another timeless classic. It has one of those chord progressions that just plays itself. It has a very distinct rhythm so try and emulate that as closely as you can. It’s a fan favorite though if you get it sounding right.

I Still Haven’t Found What I’m Looking For – U2

For a bit of 80s nostalgia, you can’t beat a bit of U2, and in particular this tune. If you play this at a campfire it’s pretty much guaranteed a produce a singalong.

Fancy an Ed Sheeran song? Well, interesting enough his track Photograph works really well on the uke. This ukulele song sounds great and is pretty low on the difficulty scale.

Riptide is one of the ukulele’s most popular current songs at present. Interestingly, it was actually written and performed on the uke (as opposed to most others that are written on guitar or piano and later transposed to the uke).

Indie folk provides a lot of songs that are perfect for ukulele, and this one is a prime example. With its shouts and stomps, it’s a perfect number to play at a ho-down (well, one assumes it would be, I’ve never actually been to one).

Groan. I know, I know, this song manages to get on just about every list of songs that’s ever been published on the internet! But trust me, in this case, it really does deserve a place on this list. It’s stupidly simple to play, and it sounds great on the uke. Besides, how often do you hear this number played on a uke…it’s always on an acoustic guitar, right.

Here’s a song that was actually recorded using a ukulele, rather than transposed afterward. Train’s famous ukulele single Hey, Soul Sister off their Save Me, San Francisco album has become a bit of a ‘must-know’ ukulele pop song classic. It’s even credited for the resurgence of the ukulele’s popularity in recent years.

Reggae songs sound great on the ukulele, and Rude by the Canadian band Magic is one such example. It’s a poppy reggae tune that’s a delight to play!

All Along the Watchtower – Bob Dylan

This classic Dylan number, popularised by Hendrix, All Along the Watchtower is a superb one to play on the ukulele. Its chord progression is pleasing to the ear, and it’s relatively easy to sing too.

Just the Way You Are – Bruno Mars

Back to the world of pop, Just the Way You Are by hitmaker Bruno Mars is another superb beginner number to get your fingers acquainted with. With just three chords, it’s amazingly simple to play.

She Will Be Loved – Maroon Five

Maroon Five make unbelievably catchy songs, and this one is right up there with their catchiest of all time. If you can sing it as well as in the video below, you’re doing a great job (wonderful, isn’t she)

One of the most played songs not just of The Beatles but of any song, this ukulele version of Let it Be is simply sublime.

I’m Yours was written for ukulele, and it actually pretty hard to play the original. It can be simplified though by transposing to the key of G, check it out.

Out of all the ukulele songs on this list, Whistle by American rapper Flo Rida is one of the most bizarre as you wouldn’t normally associate the cute ukulele with rap! But man does it work!

Leonard Cohen is one of the finest songwriters that ever put pen to paper, and among many of his many literary achievements, Hallelujah is right up there. You can play it with just these four chords, but the order is slightly more complicated so you’ll need a bit of patience. Worth it though.

Note: there is no capo for the Leonard Cohen version, for the Jeff Buckley version add a capo on 1st fret.

No Woman No Cry – Bob Marley

By now you’ll notice that reggae is fertile territory when it comes to easy ukulele songs. There are plenty of Marley songs that work brilliantly on the uke, but for sake of argument, we plucked this one out because it’s one of this most well known.

Land Down Under – Men at Work

This classic number from Aussie 80’s band Men at Work introduced us to Vegemite sandwiches and men that ‘chunder’. It’s also a stellar track to play on the uke and a perfect beginner ukulele song as it’s the same five chords on repeat.

This list wouldn’t be complete without a tune from John Denver. It just so happens that Leaving on a Jet Plane is one of those easy ukulele songs and is a crowd-pleaser to boot. You pull this one out at your next get together and people will be singing along in no time.

As pop songs go, Eagle Eye Cherry’s Save Tonight is right up there with the finest. It’s fun to play.

We’ve transversed the entirety of popular music to bring you this list of easy ukulele songs. From Bob Dylan to Vance Joy to Israel Kamakawiwo’ole to Bruno Mars, you see that you can play really any sort of music on the ukulele and it will sound unbelievably good. Refreshingly good, in fact.

Remember, chords aren’t everything, so focus on mixing up the strumming patterns and make those interesting too. The uke is such a cool instrument isn’t it, now go make some music!