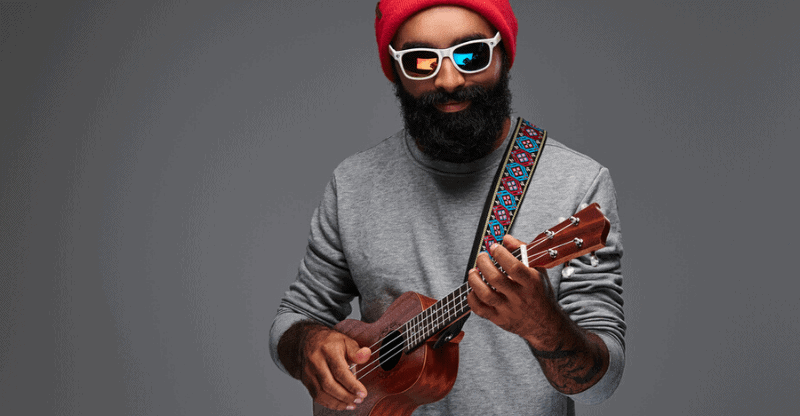 If you’re just starting out with the ukulele, one of the first things you need to know are the ukulele string names.

We label each string by the note that the open string plays. Playing open strings are also called ‘open notes’ (many ukulele chords include these open notes).

Why? Because knowing the names will help when you tune your uke (you’ll need a tuner for that too), and a myriad of other reasons, such as playing scales.

In this article, we’ll explain the string names for soprano, concert, and tenor (those three are all tuned to the same notes) and the baritone uke (that is tuned differently).

For the soprano, concert, and tenor ukulele, the string notes are G C E A, as shown in the diagram below. This is referred to as ‘G Tuning’ and is the commonest tuning that the majority of ukulele songs were written with.

If you’re holding the uke and you’re right-handed, the A note will be nearer the floor and the G note near the ceiling (if you’re a left-handed player, just reverse this).

Here are the baritone tuning notes (D G B E):

On all stringed instruments, we also number the strings from the highest pitch string to the lowest. The ukulele string order is as follows:

This is a little confusing on the ukulele because of the reentrant tuning, meaning that the fourth string (the G string) is slightly higher pitched than the third C string.

Why use numbers instead of note names? Well, once you’ve memorized the names you won’t really need them. But before you do, numbers make a lot more sense!

Here are the notes for soprano/concert/tenor and baritone, side by side: