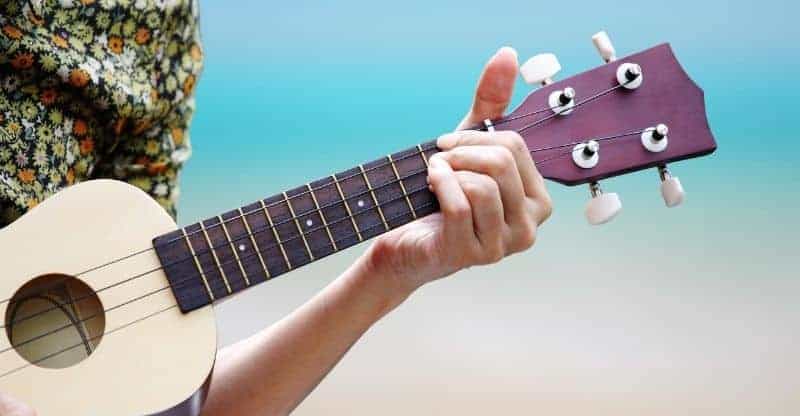 The great thing about the ukulele is that you can play soooo many songs with just two chords. Yes, just two!

Here’s our pick of the best. Enjoy!

Singin’ in the Rain

Without a doubt, one of the most recognizable songs of all time, Singin’ In the Rain uses chords C and G7 to create that undeniable bouncy sound. Gene Kelly dancing through the puddles in 1952 is what most of us think of when hearing this tune, although the likes of Mint Royale, Jamie Cullum, and even Morecambe and Wise have covered it more recently.

Using chords C and F, the Dixie Cups had dancefloors bopping for hours in the 1960s with the catchy Iko Iko. Did you know that The Belle Stars 1983 cover of the New Orleans song made an appearance in the 2009 blockbuster hit The Hangover? It was done so in homage to the 1988 classic Rain Man and done brilliantly.

Predominantly performed in C7 and Dm, Istanbul, (Not Constantinople) is much easier to play than it is to pronounce. They Might Be Giants have actually reached as high as number three in the US charts with Birdhouse in Your Soul, but it is Istanbul that is a novelty favorite among their fans.

It can come as no surprise to see The Beatles feature in another of our lists. Paperback Writer is performed in chords G7 and C, and was written by Paul McCartney after his aunt suggested that the Liverpudlian band should start writing songs that aren’t about love. What was she thinking?

Using F major and E, Tommy James and Bob King’s 1971 hit Draggin’ the Line is one of the more basic tunes to play on the ukulele. Originally released as a B side to Church Street Soul Revival in 1970, it was re-released the following year and reached number four in the US billboard charts.

Oh My Darling, Clementine is listed in the Top 100 Western songs of all time, and it isn’t difficult to see why. Played on the uke using chords C and G7, versions of this classic have been appearing in popular culture for over 130 years. When first written by Percy Montrose back in 1884, he wouldn’t have envisaged Cher Lloyd seemingly sampling the tune for her 2011 debut single Swagger Jagger.

Down in the Valley

Another song written in the key of C and G7, Down in the Valley was released in the same year as that Cher Lloyd pop song, with The Head and the Heart releasing this track in 2011. Believed to be written about daring to try new things in the world, this is a real foot stepper.

Switching over to chords C and F, Streets of Laredo is one of the great beginner songs for all ukulele players to perform. Johnny Cash’s version is perhaps the best performed, with the likes of Roy Rogers, Willie Nelson, and Waylon Jennings putting their name to this western classic.

A Horse with No Name

Have a search of Michael Jackson’s A Place With No Name, and it is immediately apparent that the King of Pop was a fan of America’s 1971 hit. The creators of hit US sitcom Friends were also keen, with the song appearing in an episode set in Las Vegas. For uke enthusiasts, it is played in E minor and F major.

There was once a time before Billy Ray Cyrus was referred to purely as the father of Miley. In 1992, he released Achy Breaky Heart on his Some Gave All album. The worldwide hit became the first single ever to achieve triple Platinum status in Australia. If you want to wow your audience with this country classic, you’ll want to do so in chords A and E.

Daylight come and we want to go home…
If you don’t think you’re familiar with the Banana Boat Song, go and give it a listen. You soon will be. At its best when performed on the ukulele, the 1956 Jamaican folk song uses chords F and C7. Of course, who can forget that brilliant Beetlejuice scene featuring the original version? Give it a Google, you won’t regret it.

You Never Can Tell

In the key of C major using chords C and G, Chuck Berry’s 1964 rock and roll hit was actually written while he was in federal prison. From the album St. Louis to Liverpool, You Never Can Tell became popular in the mid-1990s after that incredible Pulp Fiction dancing scene between John Travolta and Uma Thurman.

In the early 2010s, the pop scene belonged to Bruno Mars. Arguably his most famous song of the time was Upton Funk, released in 2014 alongside Mark Ronson. It is the perfect example of a pop song that can be adapted to the ukulele using just two chords – G7 and Dm. You’ll be the life and soul of the party in no time (if you aren’t already).

He’s Got the Whole World in His Hands

Everybody, whether from school or church, know He’s Got the Whole World in His Hands. Originally written in 1927, it reached its most popular heights in the late 1950s. Using a basic I and V chord progression, you’ll have anyone around you singing along before you know it.

Best performed in chords C and G, Everyday People is another bouncy feel-good track from the 1960s. Sly and the Family Stone took it to number one in the US charts upon release, and it has since been covered by the likes of Billy Paul, Aretha Franklin, and Maroon 5.

Lady in Black A Minor

The 1971 rock hit by Uriah Heep can be played on the ukulele in the key of A minor and is essential to accompany the chorus. Strangely, the song is about a man walking in the darkness and being consoled by a goddess in the dark. Might want to play this one with the lights on.

Beautifully, Jambalaya can be performed just as well in C major as it is in D major. Your preference will be the deciding factor when performing the 1952 Hank Williams country classic. You won’t be the first person to cover this track, with the Carpenters famously releasing the song in 1974.

As one of the more popular nursery rhymes, Three Blind Mice is one of the uke songs that beginners often opt for when first starting out. Chords C and G7 are used in the arrangement made popular as the end theme by the Three Stooges.

Nearly finished with this list now guys, be sure to keep your eyes open as we move onto Hush Little Baby. The well-known lullaby is once again arranged with just two chords, G and D7. It is quite remarkable to think that this tune has been sung to babies in the UK and beyond since 1765. You know what they say, class is permanent.

Also known as Incy Wincy Spider, here is another nursery rhyme that has stood the test of time. Most of you will know the hand actions to sing along to the famous tune, but do you know the two chords used to perform it on the uke? Your answer is C7 and F – enjoy.

Did you know that Mary Had a Little Lamb was very possibly inspired by an actual event? In 1830, Sarah Josepha Hale tells how a schoolgirl called Mary tried to bring her lamb into the classroom, only for it to be waiting for her outside the premises when school finished. You can impress your listeners even further by accompanying that fact with a ukulele rendition in chords F and C7.

Ring Around the Rosie

Does the 1881 publishing of Ring Around the Rosie – or Rong a Ring o’ Roses – tell a story about a boy kissing a girl or the more sinister explanation of the plague taking effect? While those around you debate its meaning, you can impress your friends with your version in C and G7.

Skip to my Lou

Before Cotton Eyed Joe had dance floors jumping around in glee, Skip to my Lou was the partner stealing dance song of choice. To many, it still is. Written in the 1840s, it is perhaps best-known for Judy Garland’s wonderful performance in the 1944 classic film Meet Me in St. Louis. You’ll be hard-pressed to keep the smile off your face as you perform in chords C and G7.