The Main Ukulele Strumming Patterns You Should Know 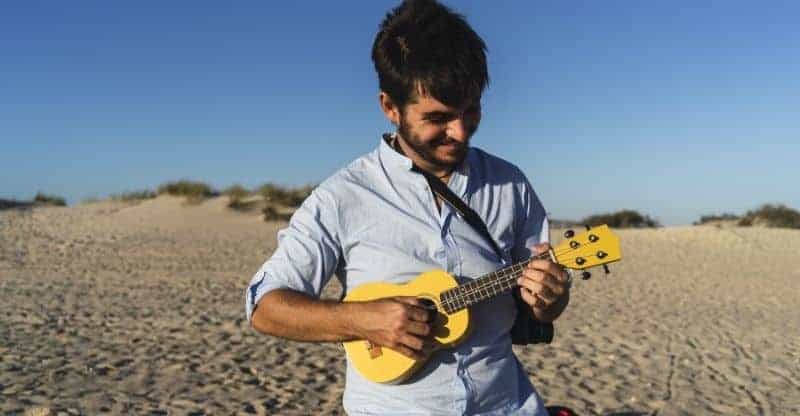 Beginners struggle with two main skills when they’re learning how to play the ukulele. Playing chords (especially transitioning between them) and playing rhythm (strumming).

Both are fundamental to playing, but often beginners focus on chord progressions and pay little interest in rhythm. This is a big mistake.

So in this article, we’re going to show you our favorite strumming patterns for beginners. Each one will help you develop your right-hand technique and will open up the doors to thousands of ukulele songs you’ll be able to play.

We’ll cover the basics, including different strumming patterns like the reggae strum. We’ll also discuss strumming techniques and give you some pointers on what and what not to do.

Does that sound like a plan? Great. Let’s get to it then.

How to Identify the Time Signature of a Song

If it doesn’t fit, try counting ‘one, two, three, one, two, three’. If that works, then the song is in 3/4 time, so try those patterns further down the page instead.

Let’s start with the most basic, the classic ‘four down strum’. It’s so repetitive that you wouldn’t want to play an entire song with it, but it tends to be the one most beginners start with. With a metronome, play on each beat with a single down strum.

Now the same but throw in an upstroke after each down strum. Your down strums should happen on beats 1 and 3 (odd numbers) and up strums on the even numbers (2 and 4). Again, it’s too repetitive to play a song with, but it’s a good one to practice to (ideally with a metronome) to build up your strumming technique.

This is a great one that you hear in a ton of songs. A couple of things to note here. First, you miss the third downbeat, which gives it a slightly syncopated sound. Secondly, you change the order at the end (up-down, instead of down-up). It sounds fab when you get it working, and is heard in everything from Outkast’s Hey Ya! to Noah and Whales Jealous kind of love.

Almost identical to the last one, this is a slight variation with an extra up strum at the end. Sounds cool too.

Try this one now. Two down strums, followed by a down up, down up. It’s the same rhythm as Wilco’s California Stars.

Now for a couple of reggae patterns. In all the patterns so far you’ve played a strong beat on the one beat. However, to play a reggae strum you need to accent the offbeat. It takes a while to get used to, but worth the effort.

Here are some 3/4 strumming patterns. Waltzes are in 3/4, as are a lot of Christmas songs. Other examples include Oh, My Darling Clementine, Down in the Valley, Amazing Grace, and Rock a Bye Baby. Remember, if you need to check, just count ‘1,2,3,1,2,3’.

Here are some patterns in 3/4 time, popular for waltzes.

and one final one, with a slight embellishment at the end.

If you’re coming from a guitar background you may need to relearn some basics. For a start, you can use a plectrum, but its generally advised against. You want to use the nails on your fingers (mainly index finger and middle finger) to get that raspy sound.

The position of your strumming hand is important for getting the perfect resonance. You generally want your hand to be between the soundhole and neck for the best sound.

Finally, strumming is all about the wrist. You shouldn’t be moving your arm much, it should all be wrist action.

It won’t be the first time you’ve heard someone say get a metronome, but it’s worth repeating. Get one!

Playing in time is the most important thing when it comes to rhythm. If you don’t have good timing, you’ll find it almost impossible to play with others. You really need to drill into yourself good timing, and a metronome will help you achieve that steady, consistent strumming rhythm.

All the patterns above can be played with a touch of swing. Swing really makes a rhythm ‘bounce’ and sounds amazing when done right. It makes the strum sound a bit less robotic (or predictable) and really adds a touch of class.

Any of these strumming patterns can be tweaked for speed. You can speed or slow down any of them, and you’ll typically find that the more complicated the rhythm, the better it sounds slowed down. Funny that!

You’ve learned some really great patterns, now it’s just a case of committing them to muscle memory, which means playing them so darn much that they become second nature.

It will be worth it in the long run and will make you a much better ukulele player.