16 Fab Songs from the O Brother, Where Art Thou? Soundtrack 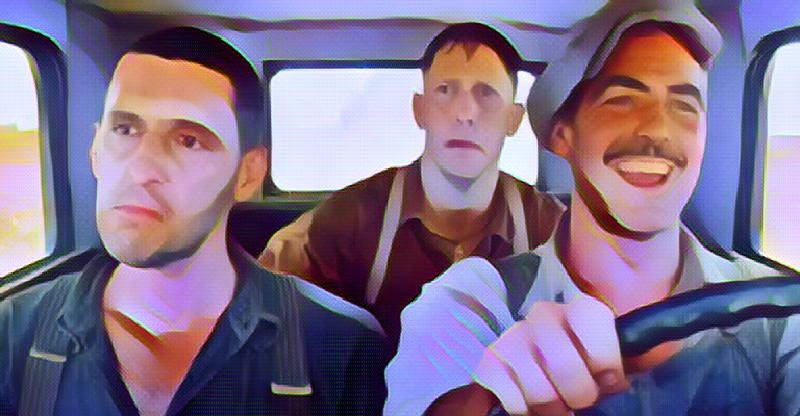 The start of the 21st century brought audiences a movie with one of the most thought-out and poignant soundtracks of all time.

In the 1950s and 1960s, musical archivist Alan Lomax headed up a series of projects archiving various blues and folk artists’ music. Thanks to his work, you can now listen to many early African-American artists on the Library of Congress’ site who might have otherwise drifted off into obscurity. One of these recordings is James Carter’s chain-gang-inspired song ‘Po Lazarus.’ It was used in a scene featuring a hard labor prison group working on a road.

This was supposedly the first song Harry McClintock ever wrote. Though it is speculated he originally penned it in 1895, it didn’t become a well-known tune until the 1930s. The song’s overall story focuses on a bum who’s accidentally “discovered paradise on earth.” The original version features some pretty suggestive lyrics, especially for the early 1900s. Fellow folksy artists like Lisa Loebe have covered a radio station version with more radio-friendly lyrics.

Related: This song features on our list of mountain songs.

You Are My Sunshine – Norman Blake

This classic tune technically wasn’t yet written when the movie is set to take place! The movie centers around America’s Great Depression (which took place in the 1930s), however ‘You Are My Sunshine’ was first recorded in 1940. It is featured in a poignant scene of the movie when a group of people sing it together while trying to forget all their troubles that have come along due to the depression.

Down to the River to Pray – Alison Krauss

Alison Krauss lends her soft, angelic vocals to the historical Christian spiritual hymn ‘Down to the River to Pray’ for a baptism scene in the movie. The oldest version of this acapella song was recorded in 1867 and is attributed as an “African American spiritual.” Over the decades, the song has taken on many versions, with countless artists like blues/folk legend Lead Belly covering the song.

The Soggy Bottom Boys are a fictional band made up just for the movie. Nashville singers like Dan Tyminski provided the singing voices for the actors such as George Clooney. Though the movie’s version of ‘I Am a Man of Constant Sorrow’ is the most popular, it was originally written in the early 1900s by Richard Burnett, a blind folk singer.

Related: Find this classic on our playlist of popular country songs.

There is nothing quite like listening to the original version of ‘Hard Time Killing Floor Blues’ by blues artist Skip James. His haunting voice and rolling guitar picking is an experience like no other for fans of early delta blues. Chris Thomas King covers this gritty song for the film. Speculation of the song’s meaning points to African-Americans who left the south to find a better life in Chicago during the depression, only to find tougher conditions.

Related: Start over with these songs about a fresh start.

Keep on the Sunny Side – The Whites

This soundtrack is full of early American music, including the 1899 tune, ‘Keep on the Sunny Side.’ Ada Blenkhorn originally wrote it as a Christian hymn for her nephew. He used a wheelchair and always wanted to be pushed on “the sunny side of the street.” Artists throughout the years have transformed the song through their covers. The Whites’ version was featured in the movie in 2000.

‘I’ll Fly Away’ was written in 1929, the same year the stock market crashed in America, and the Great Depression began. Despite bleak economic circumstances during the time it was written, the Christian hymn is full of optimism. Allison Krauss and Gillian Welch paired up for this song for the movie.

Didn’t Leave Nobody but the Baby – Alison Krauss, Emmylou Harris, and Gillian Welch

This song has been around for so long no one knows its exact attribution. Those who have worked on tracking its origin have found its beginnings in African American and Irish cultures. Sung as a lullaby, its languid melody pairs with a dark tale from a father’s perspective whose wife has run off. Left with no other options, he sings the song to calm his baby as he prepares to poison it.

Related: Check out our playlist of songs about babies.

In the Highways – The Peasall Sisters

The Peasall Sisters recorded Maybelle Carter’s tune ‘In the Highways’ specifically for this soundtrack. At the time of the movie’s release in 2000, the young group of three siblings was busy touring and releasing music. Though they are no longer together, a big part of their legacy lives on in the movie. Maybelle Carter was part of the famous Carter Family band, including June Carter, before she met Johnny Cash.

Related: Hear about more highways on our list of the best songs about cars.

I Am Weary (Let Me Rest) – The Cox Family

Americana musician Pete Roberts originally wrote ‘I Am Weary (Let Me Rest)’ in the early 1930s. He was an instrumental figure in the early days of the Bluegrass movement. He often played with the group The Country Gentlemen. The Cox Family recorded their own version of this classic song for the O Brother, Where Art Thou? film.

Ralph Stanley’s version of this vintage Appalachian-style traditional won him a Grammy. Originally, soundtrack producer T-Bone Burnett wanted a simple banjo instrumental song for the film. But Stanley convinced him otherwise when he recorded an acapella version in the studio. The song is often associated with Baptist preacher Lloyd Chandler from the early 1920s.

Related: Go to our playlist of more songs about someone dying.

The Soggy Bottom Boys is a fictional band the Cohen Brothers made up specifically for the film. Tim Blake Nelson is an actor who played one of the characters, Delmar O’ Donnell, in the movie. For ‘In the Jailhouse Now,’ he sits in with The Soggy Bottom Boys. Country artist Jimmie Rodgers originally recorded the song in 1928.

This late 1920s song is featured as a fiddle-focused instrumental with occasional harmonies. Before John Hartford recorded his own version for the 2000 movie, Floyd Ming and his band, the Pep Steppers, released the original version in 1928.

The Fairfield Four is a popular gospel group that stepped into the studio in 2000 to provide vocals and harmonies for the 20th-century Christian song ‘Lonesome Valley’ that’s featured in this Coen brothers flick. With traditionalist roots, the song is considered to be sacred and is still used to this day in churches for ceremonial purposes. The Fairfield Four provides a deeply spiritual, haunting version of the Depression-era film.

Angel Band – The Stanley Brothers and The Clinch Mountain Boys

‘Angel Band’ dates all the way back to 1860. Its lyrics are written in a poem by Jefferson Hascall. The first composer officially associated with the song is William Bradbury. The gospel hymn has taken on many forms over the years as quite a few artists have covered the timeless tune. The Stanley Brothers provided the most well-known version so far in the movie.