11 Essential Songs from The Sound of Music Soundtrack 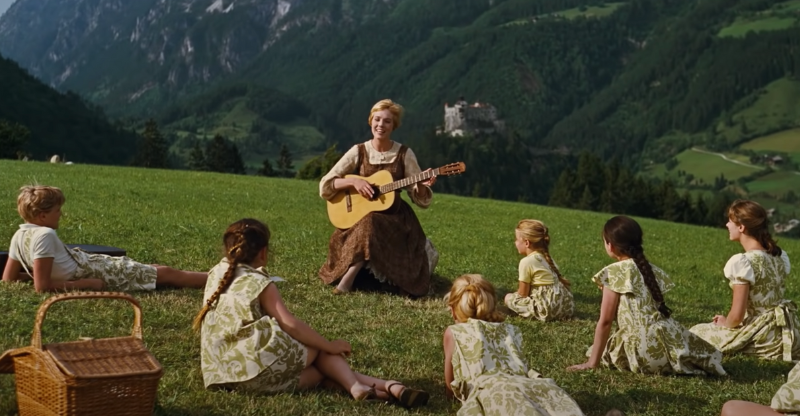 One of the most beloved and well-known musicals of all time, The Sound of Music, is loosely based on the true story of the Trapp family singers, as told in the book The Story of the Trapp Family Singers. The musical production shares the tale of love, compassion, and the journey of the family and Maria as they face impending war with Nazi Germany.

As you listen to The Sound of Music Soundtrack, explore the lovely cultural insights found in songs like Edelweiss (the national flower and symbol for Austria, Switzerland, Slovenia, Bulgaria, and Romania), the bright call to keep dreaming in ‘Climb Every Mountain,’ and the sweet, innocent love of the teenage years in ‘Sixteen Going on Seventeen.’

The Sound of Music

The title track of the joyful musical The Sound of Music is a delightful, visual journey through the mountainside of the Austrian Alps. Maria, played by Julie Andrews, sings the joy bubbling up in her heart, reflecting on the wonder of creation around her and the sheer delight of music and creativity as she roams the mountainside, culminating in the true finale of the song and, ultimately, the film.

Related: You’ll want to run through the hills with this list of the best nature songs.

Oh, Maria! What a troublemaker you are! The lyrics of ‘Maria,’ sung by the convent’s nuns, sing their discontentment with the young, excitable novice, Maria. Mother Superior rejoices in the delight that Maria is an asset to the abbey, even if she is “trouble” for the sisters, and all acknowledge the daydreamer’s effects on the abbey.

Related: Listen to more great songs that have women’s names in them.

One of the lesser-known songs from The Sound of Music, ‘I Have Confidence’ is a high-energy song sung by Maria as she heads off to work with the von Trapp family. She sings and dances as she approaches the family manor and then stands before the gates, realizing her confidence may be less than she needs in this intimidating new adventure. But ultimately, “I have confidence in confidence alone, besides, which you see, I have confidence in me!”

Related: Check out more of the best songs about confidence.

There’s nothing quite like young love, even in the middle of worldwide tragedies and pain, like World War II. And ‘Sixteen Going on Seventeen’ reflects the joy of first love, sweet promises teenagers make that they’ll always be together and find their way together. And, of course, the confidence of a seventeen-year-old boy and how much older and wiser he is than a mere sixteen-year-old!

Related: Head over to our playlist of the best songs about numbers.

Perhaps the most famous song from the score (besides maybe the title track), ‘My Favorite Things’ is a beautiful reminder of hope in times of trouble. The premise for the song is the sadness of the children when things look bleak, and Maria offers a ray of joy light through the song. Each phrase is a simple delight in life—”Whiskers on kittens,” “raindrops on roses,” “warm woolen mittens,” “silver white winters that melt into springs…”—that can bring a sense of beauty even when you’re feeling sad.

Related: Get your hopes up with this list of songs about hope.

A song for dreamers, ‘Climb Ev’ry Mountain’ was sung originally by Mother Superior back at the convent as a hopeful tune for the dreamers all around struggling to find support. The song is repeated here as the musical’s finale as the von Trapp family escapes Nazi soldiers. They flee to live another day and find that very hope the song mentions.

Related: You can find this song on our list of the best songs about mountains.

Maybe the most whimsical and silly song in the whole score, ‘The Lonely Goatherd’ is the puppet show performance given by Maria and the children for Captain von Trapp and company one evening. The puppets used in the song are based on Austrian string puppets. The lyrics are fun, silly, and lighthearted and add an emotional moment to the movie as the children explore creativity after a lifetime without much, blocked by their father, and deeply depressed after the death of his wife, who loved music and creativity.

The children grew up without music, a tragedy in anyone’s mind, especially Maria’s. When she discovers this, she teaches them all about music by teaching them the foundational notes ‘Do-Re-Mi.’ Associating each note of the scale with words that make sense, this delightful, easy-to-sing along song leads through the forest with does, rays of sunlight, “fa’ flung” distances, and much more with clever and easy imagery the kids can remember – and so can we as we sing along!

The beautiful love song for Maria and Captain von Trapp, ‘Something Good,’ written by Richard Rodgers, asks the question if the pair had something to deserve each other from early in life. The couple sings the sweet song after realizing they love each other and recalling the moment they fell in love with the other.

The nation’s symbol, edelweiss, a small, white mountain flower, is the theme of this beautiful, singable song sung by Captain von Trapp. The captain sings the song with the woman he’s interested in as a duet as he pulls out his guitar and plays for the first time in a very long time. The sweet song asks the flower to bring its favor to the nation and “bless my homeland forever,” even amid the tragedy of war.

Related: Flourish with the best songs about flowers.

The many children of Captain von Trapp are sent off to bed after a party thrown by the captain. They have this delightful “routine” worked up for saying good night. Each child has a brief solo, reflecting some of their personality, from sleepy little Gretel ready for bed to teenage Liesel asking to have her first sip of champagne.

Related: Say “goodbye” and head over to our playlist of leaving songs.