Shaken, Not Stirred – The 25 James Bond Theme Songs (in Order) 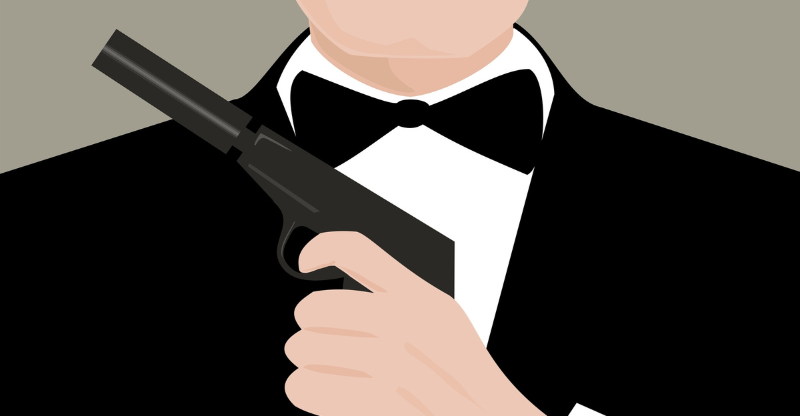 The spy of all spies with the chiseled chin, the ladies man, the guy with a real purpose: saving the world.

Whether you love or hate him, you’ll know these James Bond theme songs as many have left an indelible mark on our culture. Starting with the most recent first, let’s begin the blast back in time. Shaken, not stirred, please.

No Time to Die – Billie Eilish

Composed by Billie Eilish, the youngest artist to write and perform a Bond theme, she crafted this stunning, eerie piece at just 18 years of age. ‘No Time to Die’ is the theme for the film of the same name and whispers of deceit and brokenness. “Fool me once, fool me twice. Are you death or paradise? Now you’ll never see me cry.” The eerie song was first performed live by Eilish at the Brit Awards in London, 2020.

Writing’s on the Wall – Sam Smith

The theme for the twenty-fourth James Bond Film, ‘Writing’s on the Wall’ is a haunting tune appropriate for the film title, Spectre. Sam Smith recorded the song for the film and earned two World Guinness Records: one for recording the first James Bond theme song to hit number one in the UK and the second for the most consecutive weeks in the UK top 10 by a debut album. Smith co-wrote the song with Jimmy Napes when producers handed him the script and told him to “have a go” at the song. Smith says he wrote the song in just 20 minutes!

Favorite moody songstress, Adele, took on the recording of ‘Skyfall’ for the twenty-third James Bond film of the same name. She recorded this incredible ballad at the famed Abbey Road Studios in London. Adele was hesitant to take on a Bond theme – the instant spotlight and pressure seemed a lot. But, she boldly took it on and gave us one of the most intriguing Bond themes of the 21st Century.

Another Way to Die – Jack White and Alicia Keys

By Alicia Keys and Jack White, ‘Another Way to Die’ themes the 2008 James Bond film Quantum of Solace. The unusual Bond theme was also produced by White (from White Stripes and Raconteurs). The song is the first duet in Bond soundtrack history. The song mixes rock and soul for a completely different vibe from a Bond song.

Related: Check out our playlist of songs about people dying.

You Know My Name – Chris Cornell

There was a little “controversy” over the 2006 Bond Film theme for Casino Royale. Some folks thought “rock” didn’t fit the film franchise, even if it was Chris Cornell (known for Soundgarden) singing the theme. The song doesn’t paint Bond as the “clean” spy as much as some previous themes had. The film theme looks at Bond somewhat cold and negatively, asking about his loyalty and honesty.

A distinctively poppy Bond song, ‘Die Another Day’ performed was by Madonna for the film of the same name. The song got some criticism, though, with some saying it wasn’t her best work, nor the best Bond song by a long shot. But if you enjoy Madonna, you’ll appreciate her unique take on the character in the theme. Madonna co-wrote the song with Mirwais Ahmadzai, a progressive electronica musician.

The World is Not Enough – Garbage

‘The World is Not Enough’ is performed by Garbage, an American rock band. The song breaks strongly from Garbage’s previous sound of post-modern production. The song tells the film’s plot from the point of view of the film’s antagonist Elektra King, who is seeking world domination.

‘Tomorrow Never Dies’ was written by Sheryl Crow for the 1997 Bond film of the same title. Crow’s song was one of many songs for the film solicited from well-known artists, including k.d. lang, Swan Lee, Saint Etienne, The Cardigans, and Pulp. Originally K.D. Lang wrote a song by the same name, but it was later relegated to the credits for the film and renamed ‘Surrender.’

Interestingly, ‘Goldeneye’ isn’t just the name of this incredible song by Tina Turner for the Bond film of the same name. ‘Goldeneye’ was the name of Ian Fleming’s beachfront estate vacation home in Jamaica, where he wrote the James Bond novels on which the films are based. The song was written by Bono and the Edge from U2, and it topped multiple charts worldwide.

Performed by the “Empress of Soul” Gladys Knight, ‘License to Kill’ is perhaps one of the most famous James Bond film titles (and subsequently, songs). The song has a soulful vibe with a romantic overtone. “Got a license to kill, and you know I’m going straight for your heart.”

Recorded as the Timothy Dalton era James Bond film theme ‘The Living Daylights’ came into being via the band A-ha. The Norwegian pop group worked with John Barry (composer) on the song to create the unique rock-pop-funk song for the film score.

A View to A Kill – Duran Duran

‘A View to Kill’ is the theme for the 1985 James Bond film of the same title, starring Roger Moore. To that day, at least, it was the first James Bond theme to hit #1 on American charts. The songwriter, John Taylor of Duran Duran, approached the film series producer and told him the previous music of the films wasn’t up to much. The producer, Cubby Broccoli, took him up on the offer to “fix” the problem. This was the result.

The film ‘Octopussy,’ the 1983 James Bond film, features this easy ballad from Rita Coolidge, ‘All Time High.’ Coolidge’s career hit an all-time high when her theme for a Bond film took the world by storm. The song was written by John Barry and Tim Rice (known for Evita, Jesus Christ Superstar, etc., with Andrew Lloyd Webber). While Coolidge felt like the song felt unfinished, audiences loved the moody, romantic song.

Related: Need more romance? Here are the top love songs of all time.

For Your Eyes Only – Sheena Easton

When she performed ‘For Your Eyes Only,’ Sheena Easton was the youngest singer to create a Bond theme at just age 22. Easton performs the song at the beginning of the movie, making it the only Bond theme in which the artist can be seen on screen while singing the song. She was added to the film’s opening credits because of her unique and bold look. While the titular phrase usually refers to confidential documents, the song implies that the woman in the song does things for her partner’s eyes alone.

‘Moonraker’ was Shirley Bassey’s third Bond theme song, giving her the most theme credits in Bond films. The orchestral ballad version is the theme of the opening credits, but interestingly, a disco version of the song (also sung by Bassey) plays over the film’s end credits. The song was written by John Barry, a composer who wrote several themes and soundtracks for the Bond film franchise.

Nobody Does It Better – Carly Simon

‘Nobody Does It Better’ is the theme for the James Bond film The Spy Who Loved Me. The song was written by Marvin Hamlisch and Carole Bayer Sager and performed by Carly Simon, but it wasn’t written for the film. The producer convinced the team to submit the song to Cubby Broccoli, the Bond film producer, for consideration for a Bond theme, and Broccoli loved it. So, the song was reworked to fit the film, including the single reference to the film in the opening stanza.

The Man With the Golden Gun – Lulu

Written by John Barry and Don Black, Lulu performed ‘The Man With the Golden Gun’ as the Bond theme for the film of the same name. Her style in the song feels a bit like her predecessor, Shirley Bassey, but her own style definitely comes through, as well -the style that helped make her such a popular singer at the time.

From one of the most famous musicians in the world – Paul McCartney – ‘Live and Let Die’ comes from a play on the phrase “live and let live.” The film of the song title name was the eighth James Bond film and starred Roger Moore. McCartney was asked to write the Bond theme and gave us this fantastic piece he performed with his band Wings. The band’s co-founder, Denny Seiwell, said it only took McCartney 10 minutes to write the song after reading the book the film was based on.

One of the most memorable sounding songs from the earlier era of James Bond films, ‘Diamonds Are Forever’ comes from songwriter John Barry and the indelible singer Shirley Bassey. The orchestral favorite deeply influences this day of “spy film” soundtracks and scores. The song and film title comes from the De Beers mining company tagline of the exact phrase, adapted by writer Ian Fleming for the 1956 Bond novel.

Related: Listen to our shiny list of the best diamond songs.

We Have All the Time in the World – Louis Armstrong

One of the few Bond themes not titled for the film, ‘We Have All the Time in the World’ is performed by Louis Armstrong, the famous trumpeter of New Orleans. Armstrong was, unfortunately, too ill to play his trumpet at the time, so someone else played it, but the composer chose Armstrong to perform the song because he could “deliver the title line with irony.” The song is a sweet, sad love song about Tracy Bond, James Bond’s wife, after her passing.

Related: Kick up your feet with these good songs for retirement.

You Only Live Twice – Nancy Sinatra

Performed by Nancy Sinatra, ‘You Only Live Twice’ has a strong ’60s vibe in the instrumentation. The song has become one of her best-known hits, thanks to the stunning voice and incredible delivery. The song features a simple two-bar theme in high violin octaves with a generous dose of French horn.

Perhaps the most well-known sound of a James Bond film theme, ‘Thunderball’ by Tom Jones is the theme for the film of the same name. The film was released in 1965, starring Sean Connery at the indelible 007 (many argued he was the best Bond, until the brilliant Daniel Craig took on the role at least).

‘Goldfinger’ was Shirley Bassey’s first Bond film theme. The striking song was so popular that it led to Bassey being asked to record at least two other James Bond themes – something no other singer has ever done. The song was written by John Barry and was inspired by Mack the Knife, the “ultimate villain song,” according to Barry. Goldfinger has the “Midas touch” – turning everything to gold in his greed – a truly classic Bond film villain.

Related: This song features on our playlist of songs with gold in the lyrics.

From Russia with Love – Matt Monro

Matt Monro sings the stunning theme from the film of the same name, ‘From Russia with Love.’ The singer, Monro, has a gorgeous crooner’s voice made famous through the BBC show band. Before his BBC days, he drove a bus and was given the nickname “The Singing Bus Driver.” The song helped to lay the groundwork for future Bond films, being the first technical theme song designated for a Bond film.

The most famous, or at least most identifiable, song from James Bond films is the actual James Bond Theme! It wasn’t the film “theme” like the others films had, but it appeared in Dr. No. Monty Norman wrote the song, but famed composer and director John Barry arranged it, making the James Bond Theme what it is today – the most well-known spy theme in all the world.