17 Songs about Sunrise to Start Your Day Off Right 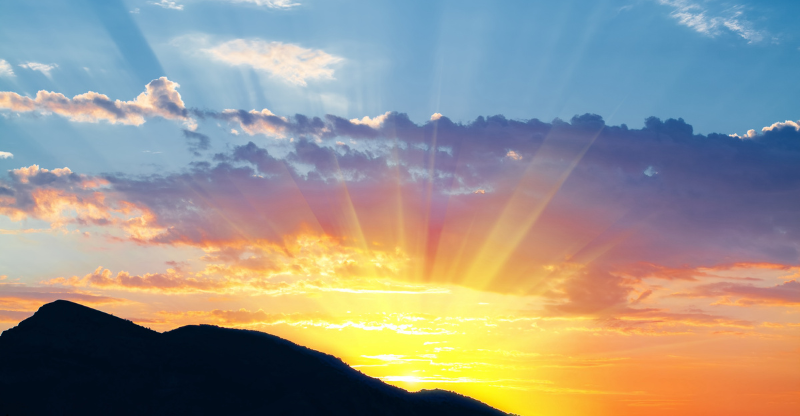 The beauty and power of sunrise have always been an important inspirational experience for artists and songwriters since the origins of music.

Check out this list of sunny songs about sunrise featuring artists like Nina Simone, Frank Sinatra, and Willie Nelson.

“Looks like mornin’ in your eyes.” Co-written with then-boyfriend Lee Alexander, Norah Jones penned ‘Sunrise’ during a peaceful break from touring when she had a few weeks to catch up on rest and recharge. The tune appears on her second album, Feels Like Home, which was a follow-up to her highly regarded debut album Come Away With Me.

Related: Start your day with these happy morning songs.

Bandmate Glen Frey sings lead for The Eagles’ popular tune ‘Tequila Sunrise.’ The song’s title is also an alcoholic beverage made to mimic the early morning colors of the sky. Add tequila, orange juice, and grenadine to make the colorful beverage. The song’s lyrics tell the story of a man who’s been drinking all night long and gets to see the sunrise.

The World is Waiting for the Sunrise – Willie Nelson

“Every road is heavy, heavy with dew.” This vintage song has been covered countless times, but the first artist to release it was Edward Allen back in 1921. Country singer Willie Nelson released a cover of the song in 1994 on his album Moonlight Becomes You. This wasn’t the first time Nelson included a cover song on one of his albums. His first number one hit was ‘Blue Eyes Crying In The Rain,’ originally recorded in 1945 by Fred Rose.

Related: Hit the road with these highway songs.

Beatles leader Paul McCartney wrote ‘Good Day Sunshine’ while hanging out with bandmate John Lennon at his house on one particularly sunny day. McCartney used Lovin’ Spoonful’s ‘Do You Believe In Magic’ as inspiration for their tune. The song is often used on the International Space Station as the crew’s wake-up alarm.

Related: Here are the best songs about sun.

“My eyes are heavy, and I need some sun.” Kygo’s ‘Sunrise’ track features the melodic vocals of Jason Walker. The track references following the course of the sun and moon while trying to find one’s way in life and dealing with changing emotions. The metaphorical song appears on Kygo’s 2017 album Kids In Love.

Waiting for the Sunrise – Death Cab for Cutie

This song by Death Cab for Cutie is a Beatles reference to their ’67 film Magical Mystery Tour. It makes sense the band would throw a Yoko Ono cover into their repertoire, which is exactly what they did with ‘Waiting for the Sunrise.’ Ono wrote the tune in ’73, and Death Cab covered it for a tribute album, Ocean Child: Songs of Yoko Ono.

“Nothing will ever be easy as you and me.” Country star Luke Bryan chronicles a sweet summer romance in his tune ‘Sunrise, Sunburn, Sunset.’ The song was written by a few in-demand Nashville songwriters, including Maren Morris’ husband and fellow artist Ryan Hurd, Sam Hunt co-writer Zach Crowell, and Chase McGill.

Related: Chill out with the best sunset songs.

Featured on a double-album project released by Coldplay, their song ‘Sunrise’ represents the first side of the album, Everyday Life. The moving tune is a rare instrumental track for the band. Because it contains no lyrics, it was never released as a single. The band’s longtime friend and co-writer David Rossi helped them produce the track.

Written by jazz great Duke Ellington and first performed by his orchestra in 1947, ‘I Like The Sunrise’ talks of the new hope a brand new day brings. Nina Simone released the tune as part of an album project dedicated to her singing various Duke tunes titled Nina Simone Sings Ellington. Frank Sinatra also covered the song in 1968.

Related: Start over with these songs about a new beginning.

Not to be confused with the famous song ‘Sunrise, Sunset’ from the famous play Fiddler on the Roof, Bright Eyes’ song tackles all the various lies people live with to cope. The end of the song takes a more nihilistic approach to life, with references to death and caskets. It is featured on their 2000 album, Fevers and Mirrors.

Sunrise in the Morning – Frank Sinatra

“And on that dawn, just when the day was breaking, I saw your face everywhere.” The poetic lyrics detail a man’s thoughts about missing the girl he loves. Though they have to be apart, he reminds her, “I’ll be thinking of you now and every day.” The romantic tune is featured on Sinatra’s 1971 album Sinatra and Company.

Related: Listen to the best songs about missing someone you love.

A song rich in history, The Divine Comedy’s tune ‘Sunrise,’ details frontman Neil Hannon’s life, growing up during “The Troubles” in Northern Ireland. The conflict lasted about 30 years and produced upheaval and violence between two opposing forces, the Protestants and the Catholics. Though the band continues to perform, Hannon remains the only remaining original member.

Related: Brush up on history with the best historical songs.

“Bathe in the sunlight. Is everything alright?” English rock band, The Charlatans, cover new beginnings and budding romance in their tune ‘Hey Sunrise.’ The band formed in 1988 and has been performing since, occasionally having to sub in new members. Their biggest hit has been ‘The Only One I Know,’ released in 1990.

“Sunrise, whisper in my ear. Say the words I long to hear.” ‘Sunrise’ appears on Mark Lanegan’s second solo album, the poetic Whiskey for the Holy Ghost. Before Lanegan began releasing solo projects, he fronted the band Screaming Trees. Musician Van Morrison and writer Cormac McCarthy served as inspiration for Lanegan during the recording of the album.

A favorite of fans of Biffy Clyro, the pop-tinged track ‘Sunrise’ manages an effortless groove. It’s also a combination of rock and pop, representing a new sound for the band. The Scottish alt. rock band formed in 1995 and continues to produce music together and tour. The first release that brought their attention was their tune, ‘Many of Horrors.’

Soul composer and musician Brian Jackson teamed up with jazz musician and poet Gil Scott-Heron in the ’70s for several projects. ‘Western Sunrise’ was one of their tracks released in ’75 on their album The First Minute of a New Day. The reflective tune encourages listeners to look towards the future with lyrics like, “The world is dark. We look to the horizon.”

Beyond the Sunrise – Belle and Sebastian

“Beyond the sunrise, that is where we live.” Belle and Sebastian’s poetic work ‘Beyond The Sunrise’ chronicles the tried-and-true prompt of story-telling: A man goes on a journey. The song echoes work, comfort, and travel sentiments with touching lines such as, “Taste hope in my skin and faith with the dawn.”

Related: Heading somewhere? Check out our playlist of travel music.