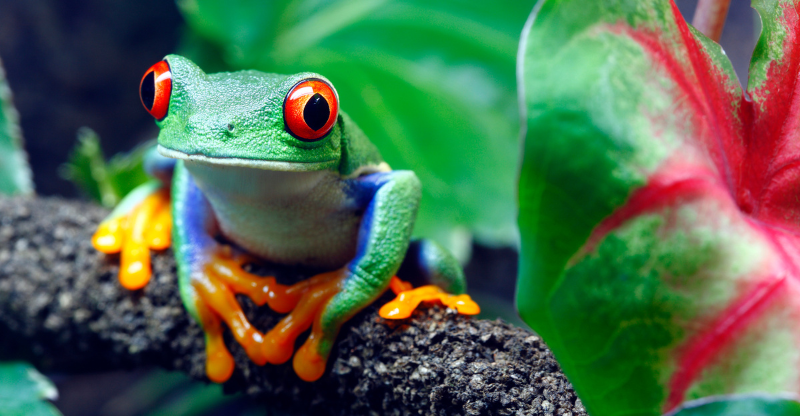 Some people find frogs to be adorable, others think they’re gross, and some think they’re delicious! But almost everyone can agree that they’re fascinating amphibians!

There are actually quite a few songs that talk about frogs, either literally or figuratively. Jump through our list of songs about frogs and chill by the water.

I Can Be a Frog – The Flaming Lips

This is a love duet where Flaming Lips’ Wayne Coyne lists wild beasts. The Yeah Yeah Yeahs’ Karen O adds animal-like shrieks to the track’s theme. Most of the track was inspired by Karen O’s candid recording, where she made the animal noises on her own. The song was released on The Flaming Lips’ 2009 album Embryonic.

Related: You won’t have to say “moo” or “baa” when you sing these animal songs for adults!

Lou Reed’s ‘Hop Frog’ describes a poem by Edgar Allan Poe of the same name. The lyrics either talk about a frog that lives in the woods or someone who is called a frog: “they call me the hop frog.” Many listeners feel that the song is a great companion for the poem.

Related: Find more songs inspired by literature on our list of popular songs about reading books.

The narrator here is infatuated with someone he doesn’t know. This person is likely a celebrity since magazine covers and wall posters seem to be where he sees her. Rather than feeling bad that he can’t be with this individual, the protagonist is happy that he can come home to her in his own way, which offers him comfort.

Related: Whether you’re crushing on a celebrity or your friend, here are some songs for one-sided love.

Peter Gabriel drew inspiration from the book The Uses of Enchantment by Bruno Bettelheim when writing this song. The song and book present the classic frog and princess story in a more adult way, with themes of passion present throughout. The song’s accompanying music video won the 1994 MTV Video Music Award for Best Special Effects.

While MARINA’s lyrics here are quite abstract, it is widely believed that it is about being passionate with the wrong person. This person seems to change their tune after he and the singer get closer and starts treating her poorly. Whether or not this song tells a true story is unclear.

The harsh lyrics of ‘Peace Frog’ were drawn from two poems Jim Morrison wrote, while Robby Krieger created the song’s guitar riff. The song talks about some heavy, violent themes, including a real-life car accident that Morrison witnessed and violence at the 1968 Democratic Convention in the United States.

Related: Be careful when you listen to our danger songs playlist.

Tim Rice-Oxley of Keane wrote this song about Razorlight’s Johnny Borrell, who was known for treating fellow musicians poorly. On a universal level, the song aims to show that you don’t have to be dishonest or inauthentic to be a successful or emotionally impactful music artist. It seems Borrell stayed civil with Rice-Oxley but wasn’t thrilled about the song, as the two didn’t know each other when it was written.

Lucky Dube sings of a woman who keeps falling for the wrong guy hoping he will change here: “find a frog, kiss it, and hope it’ll turn into a prince.” It seems that she also wants to be like her mother, but it isn’t clear whether this is considered a good or bad thing in Dube’s eyes.

Related: Check out our playlist of kissing love songs.

I’m in Love with a Big Blue Frog – Peter, Paul and Mary

This song has quite silly lyrics about a protagonist who becomes the object of a big blue frog’s affection. It turns out not to be a bad situation, as the frog apparently has a Ph.D. and a good family!

Project Pat talks about his ‘Bull Frog Yay,’ which is a metaphor for a theme that’s quite common in rap music—highlighting one’s own rhythm and talents as a musician. The artist even sings “ribbit” at one point in the song!

Related: Try to piece together these songs with lots of figurative language.

Frank Zappa seems to be singing about frogs here, at least partially in literal terms. He calls them dirty and even points out that people eat these creatures that he finds gross. He also talks about the animals wearing clothes, though, so there may also be some wordplay going on here.

Here we find Natasha Bedingfield criticizing dating in the modern age. She complains that most people she meets aren’t looking to get to know anyone or be committed to a serious relationship. She dreams of finding a truly romantic man, so she doesn’t have to keep dealing with the “frogs” she’s meeting as a single woman.

Related: Looking for a prince? Check out the best royalty songs.